Here begins 2023 on earth, yet another gregorian year…..

For majority, it shall be just another year of the human life but, for the awakened & the awakening beings, it’s going be another very important year in this physical realm, when they will be given great opportunity to break through the matrices and be free. 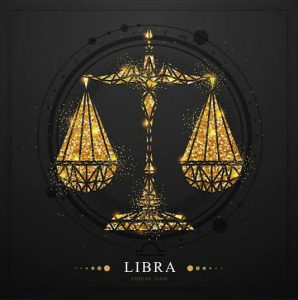 whether they can balance the inner & the outer world, whether they can maintain the balance of their body, whether they can succeed in standing up balanced in physical body, mind, speech, behavior & actions, when the earthly matrix is all planned to pose new set of challenges. The sign of Libra is also ruled by Venus, the star of love & romance and 7th house in astrology is association with beings. This offer being a chance to move into organic ways of human living, harmonious association among each other. Saturn gets exalted in the 7th sign Libra and, 2023 hosts the Saturn’s transit to the air sign Aquarius, the sign of celestial knowledge, celestial waters and, coming together for human evolution.

Saturn enter the sign of Aquarius after 30 years and, its Saturn’s own sign (mool-trikon), co-ruled by north node Rahu. Rahu represents the media, ethernet, online browsing, expansion, psychology, excessive thinking, rumors, mass hypnotism whereas law maker Saturn represents boundaries, limits, control & it forms the laws to bring the right things forth, clearing the mist in the air by bringing in right legislations & regulations. 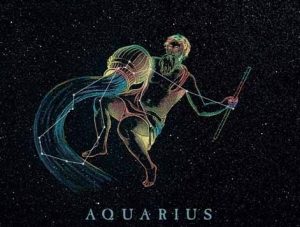 Saturn is going to play a big role in 2023, to bring in the real things in front of the human eyes, which they had been neglecting, avoiding, denying & rejecting till now. Saturn shall herald the aquarian revolution, the revolution which shall mark the fall of mass popularized ways of education, specially, the breaking of old & making of new spiritual norms. 2023 shall witness the new laws, new rules and fall of false influencers & authorities worldwide.

Certainly, Saturn’s hard task mastery over delivering judgment is already witnessed by whole realm in 2020. But Saturn’s entry in Aquarius will give bearth to new civilizations on earth, which will decide the future of whole humanity on earth. Saturn’s Aquarian way is “A Community Way”. That is Saturn’s theme for 2023, teaching beings to “play the matrix game together”.

Numerologically, number 7 is the number of south node “Ketu” and, the code Ketu is “Key To” & “Cut To”, which signify that the year 2023 would be offering two options to the beings:

1. the “key to” uplift oneself spiritually, for ketu is the significator of divine knowledge (gnan karak), &

2. to “cut” the ties with what is unwanted for one’s evolution,

Certainly, the choice is a big power in the hands of the earthly beings, for the options if opted in the righteous manner can lead to the keys to the real wisdom to free oneself from what all ties one in this matrix. To use the keys in the right manner is divine law (dharm) whereas to cut the ties to cut what is keeping one trapped in the earthly matrix is vairagya and, both are required to ascend out of this plane. Beings have to learn this in 2023 to choose the way of water, the aquarian way (as mentioned in Avatar 2) and, learn to cut ties to whom they are just emotionally connected or just to be in the good books.

In Tarot, 20th Tarot is judgment and 23 comes to number 5, 5th Tarot is Hierophant. 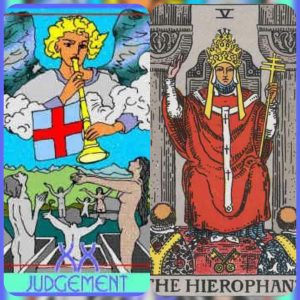 Now, 23 is yet another judgement year for the whole humanity but, unlike year 22, (2+2=4) the year of Rahu, propagation of falsehood, time liberty given still take the right turn, this yes 23, (2+3=5) is going to be the year of choosing knowledge, wisdom, divine declarations, the higher perspective of events on earth than just drowning under the feel-good factor & maintain a good image (both are rahu) in front of beings & masses.

Since 2023 comes to number 7, one can also take a look at all the minor sevens in the Tarot deck: 7 of pentacles, 7 of wands, 7 of swords & 7 of cups. This certainly will give a clear picture of what 2023 judgement shall pose to all humans. 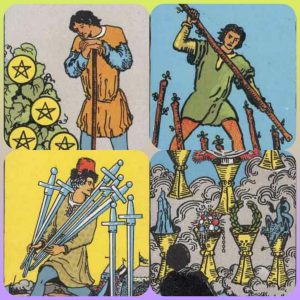 take a look at each image of minor Tarot

7 of pentacles says the humans to be watchful for the resources that they grow & gather.

7 of wands says be ready to act as the people on authority & at influential position are going to throw challenges.

7 of swords says the plans on the world stage are happening secretively & humans must become aware of what is happening behind the mainstream drama.

7 of cups says the allurements in multiple ways shall keep beings in the dreamworld but, the opting for allurements shall just be a camouflage. So, beings must be ready to make the right choices.

Now, let’s look at the 7th major Tarot: The Chariot 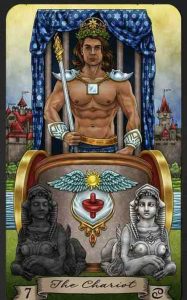 The Chariot is the card of moving out of one’s comforts zone or leaving behind the comfort zone, the rigidity & the fix mind set and coming into real time world & taking actions righteously. It conveys to leave the old beliefs behind and doing what is to be done today

So, 2023 is the year of real action and movements on individual level as well as on the whole world level. It also calls for firm discipline which is required for a strength and standing strong with will power and taking actions with full determination.

2023 will be the year of overcoming challenges and facing the truths of this reality, no more running away under the garb of “divine intervention” or “divine will do it” shall work. Beings will have to learn to face the world & it’s already running false systems with power and stand upfront while taking actions in the direction of organic living, organic eating, organic lifestyle, real wisdom and, keeping harmonious associations among humans.

Key is to Cut what all has influenced humans to keep them in dark, in the system trap and in the circus of mental manipulation all these years. Cut ties with the past, for its 2023 now. It’s time to wake up and act. Time to come together as one community who is willing to work in the direction to ascend out of this plane, for this will only help each human.