before one dives into innerstanding the transgenderism and the transhumanism, one must learn about “hermaphrodite” shared on 09.09.2021….. as for the spiritual seekers, realizing the facts of hermes & aphrodite is quite important, for as one evolves spiritually, the qualities of hermes & the aphrodite are quite visible in the beings because of the sacred secretions inside the body, however, this phenomenon doesn’t bring about any change in the physiology/physical body of the being…..

here is the link to the sharing: https://vishalsripaul.com/hermes-aphrodite/

trans-genderism is when the being is born with the transgender genitalia physically and scriptures too mention clearly about the bearth of the transgenders; the beings who were created to represent the bodily beauty in its full blossom, which carries the masculine strength and the feminine elegance, so the creator creator this third gender apart from the male & the female paired gender….. and, they were assigned the specific task in the divine order to be the celestial entertainers and the beings who shall sing divine glories & auspiciousness at the celebratory functions….. even, they were a part of the indra’s court as the sacred beings….. since, they were not identified as a gender from the external features, so they were called as kim-nar, which means what-man or a what beings; hence, the word kimnar…..

they are also called as eunuchs today, however, the eunuchs does not represent the trans-genders in principle as eunuchs today are the men who are castrated, not born with the transgender genitalia…..

in the post-mughal era, when the transfer of the ruling power happened between the emperors and the colonizers, while all were beings ascended from the lower planes of existence as known as the under-world, so firstly, they wanted to populate more hybrid beings of polluted races and the whole agenda was carried out on this land for almost 400 years and thereafter, to control the population as well as to have more infertile race, the new-world agenda of trans-humanism was planned, spread and carried out on the world screen, while injecting chemicals to the gestating mothers so that the trans-humanism looks like a born character than a disease carried from the society…..

but, “trans-humans are not born with trans-gender genitalia…..”

they are either born with a male or a female genitalia but because of their inherent qualities they identify as one of the gender assigned in the new-age trans-human spectrum or, beings have to undergo a gender re-assignment surgery in order to fully adopt the traits of the gender they identify their self with….. so today, the beings who identify their self as any part of the new-age gender spectrum, majority are completely unaware of what agenda is been ruled out in this realm as

“trans-humanism is a total mis-match between a being’s body and the spirit…..”,

hence, the total discomfort in the being from the growing stage itself and, the being feels they are trapped in a wrong body, however, everything in the earthly physical body is dependent on the secretions in the body, which the beings cant see but, the secretions only bring about the awareness in a being….. and, with the injections, the pills, today’s food that mother is prescribed today is a part of the planned deception of the trans-humanism agenda, similar to the gender equality so that men & women in societal frame look similar and equal, but, “no two beings are same and equal…..”

this all new-age agenda is in order to create a new completely infertile race on earth and so are the various vac-sin programs too a part of this agenda, which begin from the infant stage and now a days, it continues till the age of 12 which is the prime time, when the physical body becomes empowered to unlock its fertility, the power of re-production…..

trans-humanism as one of the main new-world order agenda is carried out to camouflage beings, so that beings remain completely diverted from the main rainbow and keep remain attached to the new-age inversed rainbow and the continue to take pride in the inversed rainbow….. as the flag of the trans-humanism is an inversed rainbow which doesn’t cohere with real rainbow and the “vibgyor” scheme of color spectrum of the spiritual centers in a being….. it goes exactly opposite to the real rainbow scheme, hence, it cohere with the devolution of the beings and there is no pride in devolution, in falling in the pits of hell, falling prey to the new-world order agenda sold on the name “being’s own choice”, “freedom” and “liberty”, however, it’s nothing but a trap to drag beings to lower realms of existence and to keep them enslaved while destroying their vitality & fertility…..

remember, the real rainbow is vibgyor, its rising, its evolving, it goes upwards….. hence, the rainbow being uplifts the being out of this earthly plane….. 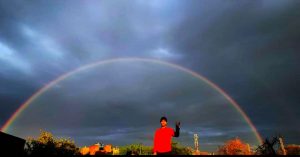 loving beings and filling them with zeal to evolve is no crime….. loVe…..