bowing at the beautyfull lotus feet of sriguru, whose grace is my only solace and who is my ultimate savior from the age of darkness…..

many had been pondering over the matrix & the simulation part of our earthly reality….. few realize that it is a matrix but still there is a question about the simulation part and also, whether the simulation is fixed like a game….. certainly, it requires years of practice in order to reach onto the state where one realeyes that it’s a matrix and it’s like a drealm experience with eyes wide open…..

scriptures mention clearly about matrix (matrika) and simulation (different layers of created visible realities), viz. in one of the sequences the creator god brahma sees krishna functional in two different realities at the same time, which is like two different simulations functional at the same time….. today, when the world is coming out of the mind plane which is more emotional and psychological, the intelligence is seeking answers for what this reality is and how this matrix functions…..

all must know that just like the physical plane, the visible plane is fixed in a game simulation, similarly, in a being’s life too the situations in the earthly physical life is fixed which is based on the form of karma that one carries…..and, based on the appearance of events in the physical life of a being, one is able to define whether is a good event or the bad event which is further defined on the basis of the earthly definition of favorable & unfavorable….. but, the events in a being’s life take place thru’ the karma code that the spirit carries in its dna and the same dna code receives the cohering transmission from the kosmic system and thence, the event takes place in the earthly physical reality…..

“future drags you through the past & present…..”

the future event or future stature that has to be created in this fixed game, its simply created through the transmission to the being or the beings around…..and, its all controlled and navigated by the stars up there in the sky…..and, in this yug, rare is able to exercise the choice and rare of the rare has the ability to reach on to the point of exercising ones free will…..

rare would be the spirits in this reality who exist with an active code, who would chose to evolve, because game of the matrix begins as one choses to exit, till then, its a 100% robotized simulation….. 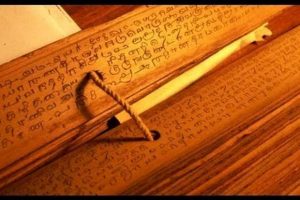 remember, when i worked in the corporate for almost a decade and i happen to listen to an extra-ordinary system of astrology which is called nadi-jyotisham, in which the life is pre-written by a maharishi on a palm leaf (still have it)…..and, when i listened to what palm leaf mentions about my bearth, i really mocked and laughed at it as it mentioned all about spiritual life and getting engrossed in it so deeply that i would be leaving my job too…..and, that time i was planning to set up a factory project but, as the palm leaf mentioned, 2014 was the year when the event happened in my life and things completely took a u-turn….. from a factory project, a reputed job to completely into spirituality….. signs were there from childhood but, the fixed life drives and dragged me from all sides onto the path of my master…..

although, i never took it seriously even that time or later but, the current events in the physical matrix too happened exactly the same way it was mentioned in the nadi….. so, the events around are all fixed but, one must practice strongly to begin with a choice, either to be divine or devil….. event occurs and do you still stand firm on your path or you slip, that’s what the teachings of scriptures and the great masters had been…..fixed unfavorable events will try to malign ones mind, take away ones intelligence, will put the dark veil on eyes, but, will you make a choice to be righteous…..that’s the test of kal, the litmus-test, the acid test, the examination…..

astonished i was when i listened to the mentions of the old papyrus recently about how the matrix is taking turns and how it will open up with divinity…..so, the palm leaf, on one hand, brought the factor of fixed matrix and the fixed events around, controlled by the stars but, one the other hand, it brought the factor of choice so that you can navigate….. certainly, the game becomes easy when you know what is coming up in the matrix…..although, you can not avoid any battle, any event appearing in the matrix, but, righteously you can navigate in love and without harming any fellow being…..

today, there are many such palm leaf readers available all over working for money but, the rare are the real ones who have the original palm leaves written by the maharishis and preserved in a specialized way in the gurukuls, from fire, water & air…..the original palm leaves which were left in southern india in vaitheeshwaran, after britishers burnt & destroyed the majority of palm leaves, but, still are palm leaves for some beings do exist and can be identified with a being’s thumb impressions, which is wonderous…..and, it marks the presence of “ancient biometric script of a being”…..

this is totally based on my own experience of the palm leaf which was performed pre-2014 and i personally cross checked and tested the palm leaf in the gurukul and everything came out exactly same as it was mentioned before 2014…..

one must begin to make the choice individually as it’s an individual game simulation and rare beings would be able to break this fixed coded martix….. in the next blog, shall be speaking on the matirx code…..

note: any one willing to get their nadi-leaf identified, can write to me at v@vishalsripaul.com….. i can share the contact detail of the shastri who identifies from the original kandam and reads your palm leaf (if found), rest of discussion and liasoning is completely your task…..you can also write, in case you have any more questions in relation to this…..open for all…..