beings on this land had been talking about various healing modalities and the all focused on healing the physical or the mental-emotional challenges, and, yet at the same time all revolving around the commercialization of the energy or the light which no different than the governmental systems of selling the aetheric energy gathered from the universal nature and put it on a paper price….. no wonder, all devilish systems function the same way and, beings enter any of this system for finding a solution to a trouble or a challenge and end up in becoming a certified or a degree holder of the energy healing or whatever fancy words that humans have discovered in the last one century, without even knowing for a fact that how the words are spelled and these words are creating a spell on people while attuning them, mesmerizing them to a fancy image…..and, that’s what even the meditation as a product has done to the people and similar is what these alternative modalities means the altered way of the natives modalities have done to the beings….. 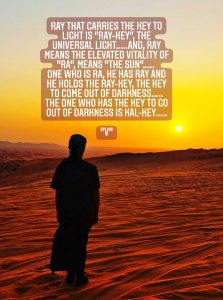 beings today must wake up and know thy source, know thy self, know thy knowledge, know thy light, know thy rays than using any modality and calling it coming from divine light or divine source…..as to access the divine source or the divine light, one need to know the divine laws, the divine architecture and, the divine functionality than just imagining the disguised light and getting the healing through it and falling prey to the dark forces, which disguise beings to be their slaves, for petty benefits, for altered ways than to let the beings be on the divine path…..

however, when the being uses this alter-native method then it should affirm them on the path to divine and, they should evolve but, the opposite happens…..the beings begin taking the degree of learning than learning wholly which would have led them to their own progress than selling reiki or any other fancy named modality, without knowing what it truly is…..as it’s just like a true system which holds the capacity to hand over the key to exit is propagated and popularized to keep one trapped in the earthly prison, while breaking the laws of light, breaking laws of divinity and mis-using the key in utter ignorance…..

no wonder, one can witness the healer’s state in the last 2 years of plandemic and bigger joke cracked on humanity was when healers were healing the virus…..that’s what the devilish rituals and devilish acts have done to the beings, kept them away from the real light and made them fall for their fake ego, their false sense of knowing and they are kept away from the light, the knowledge and then, the freedome….. each moment the choice remains with a being to either act for him/herself individually, decide for oneself or to continue falling more and more into the darkness as when one falls, it’s never one step down, it’s multiple steps down, untill one wakes up for to act for oneself than comforting other beings…..

still some time left…..earthly time is the real currency…..!!!