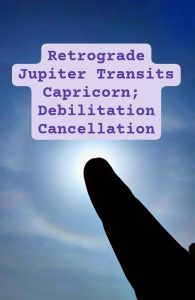 my bows at the lotus feet of sriguru mahavatar babaji, who lotus feet are my ultimate abode, who is the ultimate deliverer of knowledge unto me, in whose service i breathe and act, who is my father, my mother, my beloved, my friend and my svaior, without whose grace i am nothing and i shall forever remain his servant…..

jupiter, dev-guru bruhaspati, sur-guru, the most auspicious gruha which represent absolute knowledge, ultimate goal, guru, divine laws, mysticism, liberation and is functional thru’ expansion, transmission, grace, nectarine deliverance and thru’ it’s light giving aspect….. no wonder, the scriptures keep the master at a high pedestal and give all around praises & glories to a guru which is most archaic in it’s functionality but, not stereotype as seen in the world today, which is more martian (mars based) than jupiter based…..

tonight, in the early hours of 15th september, the retrograde jupiter will be making it’s transit in saturn’s lordship sign capricorn (makar)….. jupiter and saturn play the major role in the visible world play as well as in the inside world of the being as jupiter is the wisdom and saturn is the discipline which are of utmost importance for the progress of a spirit in this earthly matrix….. as the retrograde jupiter transits capricorn, so retrograde saturn is also there in the same sign….. the world has already witnessed a greater change in the play as jupiter-saturn made their inter-star play from december 2020, guru from it’s the wisdom testing time in aquarius, which is an airy sign also ruled by rahu, shall now be creating a chance for all spirits to actually make the right choice now in the earthly sign capricorn…..

you can’t see air but just feel it, and, when it’s the rahu’s impact, it marks rumors and the wrong decisions which you made in the past, so, guru here creates an opportunity to recover from your mistake, keeping your rahu driven ego aside and still make the choice….. as retro jupiter moves into capricorn, you will begin to see what all happened under the dark influence of the forces and what all was appearing to be right in the past, it shall now appear to be wrong as the things shall begin taking a earthly shape…..

10th sign of the zodiac is the natural sign of action, work and profession, so guru here shall bring your actions from april (from the time it entered aquarius) till today in the light, so that you are able to learn from where you went wrong and what all unrighteous you did….. time to act on earth than being airy…..

guru is a graha which has no vakra drishti like saturn, its drishti/ aspect is always gracing but, while it transits its sign of debilitation where it loses it’s power because guru is not interested in the earthly work but in the higher functionality thru’ higher knowledge…..but, here jupiter is also getting the power from saturn as its forming cancellation of debilitation for jupiter, as it undergoes the purification phase of it’s debilitation, which is called neech-bhang….. so, till 20th november, the neech- bhang is ongoing, firstly the purification phase till 18th october and then, the action phase from 18th october to 20th november untill jupiter transits back to aquarius with it’s power regained after complete cancellation of debilitation…..

in the earthly way, the three-dimensional way, jupiter is entering the sign of work, action as mentioned, so it shall be gracing you with the earthly actions which were just in the mind and yet a chance is given to purify, rectify and then, re-do it…..as it’s the time to re-do, re- design and re-set for all earthly matters….. so, what all earthly matter’s shall be brought into your light?

1. the work or profession related actions and decisions which you were not able to take earlier:
you will have take decisions related to your profession on earth as jupiter enters the 10th sign, the house of karma, now, you might have to be very sincere now, as saturn is also there in capricorn which shall influence the decision making….. if you had been thinking of changing your career, you would be able to take decision…..

2. the speech related corrections:
as jupiter aspects the 2nd zodiac taurus with it’s 5th aspect, where rahu is already there giving fire & exaggeration to speech either directly or thru’ web or social media, it’s time to re-do & re-fine the speech as rahu will quieten now receiving the earthly wisdom aspect from jupiter…..5th aspect bring about learning which are primary, related to speech, immediate family and also, during this period, you get a chance to correct what all you disturbed through your bad rahu triggered speech…..jupiter here gives a compassionate speech and wisdom part shall help correct the past mistake, for the porgress…..although, you might chose an in-direct way which is because of the retrogression…..

3. the home front and major decisions related:
as jupiter casts its 7th aspect on the 4th sign cancer, which is the natural significator of home affairs, mother, property, facilities, resources etc…..and 7th aspect means the associations and it’s the direct aspect…..so, jupiter ensures here that you will be having some good time of rejuvenation, re-creation and re-freshment while being visited by close associates and, jupiter here creates an opportunity to take decisions related to home front or earthly matters be it buying a property or a vehicle, re-construction of not only house but, relationships too and it shall be joyous & blissful…..mother’s health will also improve…..

4. day to day related, mundane activities:
jupiter giving its 9th aspect on the 6th sign virgo, shall bring light to your routine to make it righteous and lawfull as 9th aspect means the dharma, law….. 6th sign virgo is already occupied by mars and mercury, so with jupiter aspect along with saturn’s aspect on this sign, you will be able to look at your body related issues and you will be able to overcome the issues intelligently as jupiter transmits its knowledge to mercury sitting in it’s own sign…..

so, overall jupiter will bring about actions in your life related to the aspects mentioned above but, this transit also gives an opportunity to repent while being in connection to saturn, for all you did in the past as jupiter’s entry in dhanishta nakshatra will bring about the dharma aspect of earthly matters and saturn already placed in shravan nakshatra, which means to learn to find artha (meaning) thur’ listening, but, it shall be now dharma based, concrete and earthly than rumor based, airy and exaggerated…..

so, re-think, repent, re-do, re-create, re-stablish, re-fine and re-structure….. it’s a great opportunity….. those who have good shravan may listen and act in dharma…..

apart from this, on the world stage, you will witness the greater events taking place too…..
(also, do refer to the previous blog series on bhavishya darshan- 1-2-3)
mass media shall be exposed in front of the world for creating wrong image of the righteous and the people shall no more be distracted by the media by bringing about the false image and people shall begin to speak on the lockdowns, plandemic, fake testing as well as the farmer’s protest too shall pick up pace during this time…..

people worldwide shall be seen speaking against the law and order, and this shall be one more chance to the masses to re-think on what authorities are doing to them and stand together…..the lockdown, as forecasted for the third wave shall not be successfull but then yes, children shall be suffering during this game, but, not at large…..be safe for your children and see they do not become part of this third wave trick…..

although, there are chances that government will try to impose the staggered martian law but army shall also be speaking and taking action against the governments, which shall lead to the change in the current law…..so, good chances for a bigger re-set atleast for the spirits who are ready to take necessary action for theirselves…..

jupiter’s transit is a good time for spiritual practices as saturn allows a time of solitude for penance and this transit also opens the window for sincere spirits to break the falsely created norms by the spiritual industry today around the phoney-baloney obsolete practices, the ashram system, the eye-doll worship and the entertainment attached to it…..time of re-set…..

note: this is to give a wider view, however, the results shall vary from being to being based on which house in your horoscope jupiter is transiting as well as the overall composition of your lagna chart….

you may also write to me at v@vishalsripaul.com